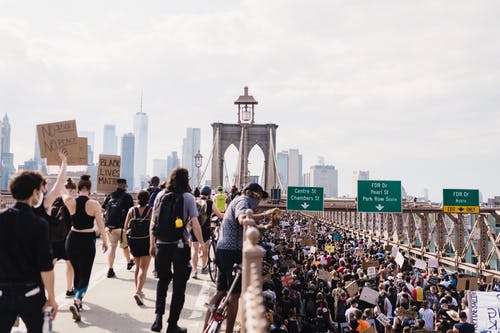 Posted at 11:39h in Uncategorized by Jo

(Reprinted from The Incidental Economist)

Sometimes I write pieces and can’t place them. I usually save them for later. In this case, I feel strongly enough about it that I’m posting it here. It won’t get the eyeballs it might at a major media site, but it’s more important to me that I publish it now.

Public health has a messaging problem. It’s made the management of COVID hard in the past, and it’s potentially damaging our ability to manage future issues. Some are arguing that declaring the protests more important than infection is damaging the credibility of experts to recommend actions related to preventing outbreaks.

Both the issues being protested and the pandemic are crises. But comparing them, or weighing their relative worth, is a mistake. Black Americans are at real risk from state violence and structural racism. They are risking their lives if they don’t protest, and they’re risking them if they do. Many of us cannot understand the risk calculus, and we likely shouldn’t try. Instead, we should focus our messages consistently on improving health, admitting what we don’t know as well as what we do.

This isn’t the first time we’ve failed to be transparent and clear.

When the pandemic initially reached our shores, we told people that masks were not necessary, because – at that time – most people were wearing masks to protect themselves from infection. Now, however, the prevailing wisdom is that masks might prevent people from infecting others. There’s some evidence for this, although we wish there was more. Given that many more are infected in the United States now, encouraging the wearing of masks seems like a low-cost, potentially beneficial thing to do to protect others.

We have failed to explain these nuances well.

When the pandemic first raged, we did not know how many people were infected, where they were, or how catastrophic this might be. In addition, we feared that many were spreading the disease without knowing they were sick. Studies showed that people without symptoms were infecting others, and because of this, we needed to separate everyone, even when it meant economic or personal sacrifice.

Recently, though, the WHO muddied the issue by first appearing to assert, and then walking back, the claim that asymptomatic transmission is ‘very rare’. Communication could clearly be better.

When I saw protests by people demanding the country open, I noted a lack of masking and social distancing. I was concerned.

When I see protests by people demanding an end to structural racism, my concern remains. I support the call for social justice and radical reform, and I support recommendations that reduce the risk of infection.

That message has been articulated differently by many in public health. Some have taken to making judgments about the value of protest activities, and whether they are, therefore, “worth” the risk. Such judgments from public health experts may make infection control efforts more difficult because others will deem different activities “worth” risk themselves.

More consistent messaging would be desirable.

Public health might be better served continuing to push for the things that will make everyone safest in the coming months and years. These include both the need to eliminate structural racism and the need for better infection control.

As we move into the next phases of this pandemic, we must shift from extreme social distancing to risk minimization. I discussed this weeks ago when focusing on camp. We can do the same with protests.

While outside activities are less likely to lead to an outbreak, the potential still exists. The time and intensity of exposure also matters, and as we seek to minimize risk, we should try and limit both as much as possible. Therefore, we should, as much as we can, limit discretionary activities that take place with other people. When such activities occur, we should make them as safe as possible.

Protests are almost all outside, which is a good thing. In an ideal world, protestors will also respect social distancing and stay physically apart from each other, as they are able. They should wear masks if they’re shouting/chanting/singing. They should wash their hands, or at least carry hand sanitizer.

If they are worried about having been exposed, or have any reason to think they might be infected, they should get tested. They should self-isolate while awaiting results. They should be concerned about infecting others, and make every effort to keep their fellow protestors safe.

Most importantly, they can avoid arrests.

A recent study published in Health Affairs looked at the relationship between jailing practices and the pandemic in Illinois. They found that “jail cycling” is significantly related to COVID-19 infection. In fact, it accounted for 55% of the variance in case rates in Chicago and 37% in all of Illinois.

Jail cycling was more of a predictor of variance than race, poverty, public transportation, and population density. Unbelievably, cycling through Cook County Jail alone was associated with 15.7% of all documented COVID-19 cases in Illinois and 15.9% in Chicago as of mid-April.

Locking protestors up will increase infections.

Infection control efforts might be better served focusing on these facts and continuing to argue for the things that will make everyone safest from COVID transmission in the coming months and years. That includes continuing to call for much better and more ubiquitous testing so that we can really understand who can participate in riskier activities and when. That also includes the elimination of disparities in every aspect of society, including both the health care and criminal justice system.

We should also publicly recognize that sacrifices matter, financial and personal; it is difficult to make them. COVID-19 is deadly. Economic ruin is horrific. Missing out on important life events is soul-crushing.

Structural racism is all of these things.

Aaron E. Carroll, MD, MS  a healthcare speaker, professor of pediatrics at Indiana University School of Medicine who speaks/blogs on topics such as COVID-19, health research and policy at The Incidental Economist and speaks LIVE on Healthcare Triage.