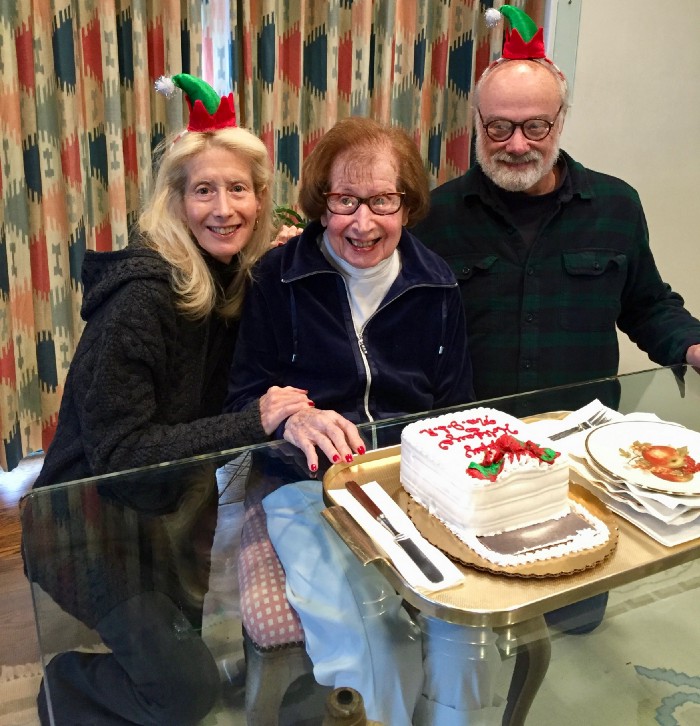 “I think it’s time,” said my mother’s primary care provider during a phone call following yet another of Mom’s hospitalizations.

As my mother’s family caregiver, I accompanied her to doctor’s appointments, oversaw her medical care and finances and was involved in every aspect of her life. At age ninety-nine, just a few months shy of a hundred, she had outlived two husbands, raised a blended family of six and knocked off open-heart surgery, breast cancer and melanoma, but she couldn’t fight the dementia that had turned her Summa Cum Laude, Phi Beta Kappa brain into that of a confused child. A former college professor of Greek and Latin, she was known in our family as “the guardian angel of grammar,” the one who jumped to correct us if we had the impertinence to say, “between you and I.” Now? She couldn’t remember ever having taught anyone anything.

I felt tears prick at my eyes as the dreaded word “hospice” echoed in my head. Didn’t hospice mean The End? Giving Up? Having to Say Goodbye? Reality?

I couldn’t process this news. My mom was my everything, my best friend, the person who promised never to leave me after my father died of brain cancer when I was six. As the doctor was offering up names and phone numbers and I was dutifully writing everything down, I couldn’t stop crying, couldn’t stop wishing the word “hospice” hadn’t entered the conversation.

My mother had been lucky to be able to stay in her beautiful house as her health declined, and we’d hired a terrific caregiver to live there with her. Being at home had given her the sense that she was still in charge, still running the show, still the matriarch. And I was supposed to tell her I was bringing in hospice? I knew she’d resist the intrusion, even in her diminished state.

So when the hospice nurse came to do her evaluation, she and I discussed my mother’s fear of death, of discussing it; her insistence that she was still the queen on the throne. “Is it OK if I tell her you were sent by her regular doctor just to check on her?” I asked, “without mentioning you’re with hospice?”

“It’s OK unless she asks me directly,” said the nurse. “I can’t lie to my patients.”

As I suspected, my mother was fine with my explanation for this new person coming to see her on a regular basis. She greeted the nurse each time by extending her hand and saying, “Do come in,” as if she were hosting a cocktail party. As it turned out, she was enlivened by the nurse’s visits, perking up at the prospect of a guest in her home. I half expected her to bring out the silver and tea sandwiches! Her upbeat mood was contagious, and whenever she was happy, so was I. We turned each hospice visit into a festive occasion, rather than the dreary experience I’d imagined, and it was a morale boost. I’d return to my house each night feeling more relaxed than I had in a long time. My mother was in good hands, not depressed, not afraid.

As my mom’s condition worsened, there was less chitchat and more administering of oxygen and morphine. Even then, my mother was thrilled to have this new person around, so kind and attentive.

“Do you think she’d want the chaplain to come and pray with her?” the nurse asked.

I guffawed. “My mother is a confirmed atheist. She doesn’t believe in God.”

“Jane, she’s at the stage where she could go any day, at any time,” the nurse said gently but with the weight of her experience. “Some patients enjoy having a comforting word, no matter where it comes from.”

“Sure, let’s try it,” I agreed, trusting her judgment.

The next day, the hospice chaplain, a former Catholic priest, arrived. He was tall, blond and handsome and spoke with an Irish accent, and my mother, though she’d been barely conscious, smiled broadly, even flirtatiously, at the sight of him, before closing her eyes and listening to his words.

The chaplain prayed for peace for my mother, for her eternal rest, for her smooth travel to heaven where she’d be reunited with her loved ones who’d passed. He had come to reassure her, but he also reassured me. After months of fighting my mother’s impending death, of desperately not wanting her to leave me, I felt lighter, more accepting of the inevitable.

Mom died a few days later. The hospice staff arrived, took care of all the details and freed me up — both to grieve and to forge ahead with the rest of my life. Hospice changed the entire trajectory of the journey, for my mother and for me. Instead of being the definition of doom and gloom, they were the epitome of serenity and hope.

Jane Heller is New York Times bestselling author of 14 novels of romantic comedy and 2 nonfiction books (one about baseball, the other a survival guide for caregivers). She is a speaker who is invited to deliver her warm and humorous words of encouragement about not only living life to its fullest but also approaching end of life issues with grace.